We finally bought a house, and while it is a 3 bedroom home, 2 of the bedrooms are upstairs and the 3rd is on the bottom floor. We decided that while our kids are young, they would share a room and we would leave the 3rd bedroom as a guest room/ office. I can’t say I wasn’t nervous about this transition, I can’t say I don’t feel nervous about every single transition we ever face with the kids, but a month later of room sharing, here we are and everything went smoothly.

Here is what I learned along the way that was KEY and why I think sibling room sharing is something all families should try: 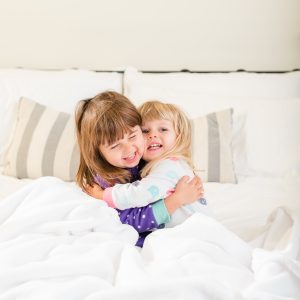 First, a little background information. My kids are almost exactly 2 years apart. I have an almost 2 year old little boy, and an almost 4 year old little girl. If they were the same gender, I would plan on room sharing for their whole childhood, that is how much I believe it is beneficial for siblings, however, because eventually they will each need their privacy, I think this is something we will do at least for the next 5 years or until it seems clear they need their space. I realize we are lucky that we even have the option to give each child their own room as most families around the world share a room for the whole family!

When can your kids start being roomies?

The key factor to successful room sharing is independent sleep skills for both kids. Otherwise the kids will wake each other up throughout the night and no one in your household will get very much sleep. When I work with twins, they learn to sleep independently together so while they may initially wake each other up as they learn to self soothe, they will eventually both learn and get used to each others noises, so if neither of your kids has independent sleep skills, you could technically teach them at the same time. Your kids do not need to be on the same schedule to share a room. If one goes to sleep earlier than the other, that’s fine, they can still room share. In our case, our kids share the same bedtime so they go down together. 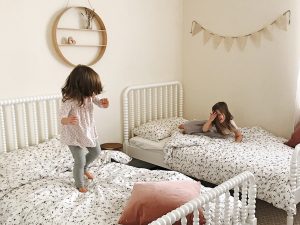 What are the essentials?

When room sharing it is even MORE important that the room is dark and distractions are eliminated. In our case, after a night or two I realized that one sound machine wasn’t enough. The room my kids are sharing is big so we gave each child their own sound machine. My son’s crib is right by the window and you can hear cars passing by. When he was waking up in the night when we initially moved I realized the car engines were waking him up and scaring him. Once I put his hush sound machine right by him, he slept soundly.

Also, prior to moving them into a room together, my daughter was using the hatch night light set on red. This was extremely distracting to my son and he spent the first nights shouting “LA LUZ!” (“THE LIGHT”), so I pretty quickly removed that. My daughter didn’t seem to mind and it didn’t affect her sleep.

This was especially true for my 3 year old daughter in the toddler bed. In the first nights she would come out to let us know her brother wasn’t letting her sleep. I told her she needed to ignore him and that we expected her to stay in her bed. We occasionally had to give her consequences for coming out of the room until she understood the boundary. At first it took them 30 minutes to settle down, but now that the novelty of room sharing has worn off, they both go to sleep fairly quickly.

3. Let go of the fear that they will wake each other up

This was my biggest worry going into the change. They may wake each other up, but you will be surprised at how quickly they learn to ignore each other. My son consistently wakes up earlier than my daughter and calls out for me. At first I would go in right away and get him because I didn’t want him to wake Alessa up, but now I have him wait until I am ready to get him and Alessa still stays soundly asleep. Be careful of getting into a habit of responding immediately, especially in the early morning, or you may fall into an early morning wake habit. On the flip side, sometimes Alessa stalls at bedtime and comes in and out of the room, but once Nico is asleep for the night, he is in deep sleep and his sister has yet to wake him.

Why I love it:

One month in and I have to say I LOVE that they are sharing a room. Here are some of the reasons why:

The last thing I want to add is that I have often thought about what I would do if one of them were sick, or had a particular issue in the night where they were up all night, and how I would handle it. To give an example, when we first moved here, Nico was starting to wake really early again. We were about to travel so I decided that if it was still happening when we got back, I would have to resleep train him for the early mornings and I would bring Alessa into our bedroom to not disturb her if he happened to protest a lot. While we were away he started to sleep later so I have yet to encounter this but I think I would do this for sickness or anything else that could pop up. Once everyone were back to normal I would put them in their room together again.

I hope this has been helpful and encouraged you to give room sharing a go. If you need any additional support, you can schedule a time for us to chat here.