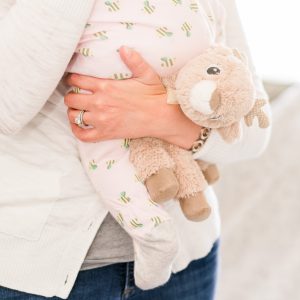 The first year of your baby’s life is full of changes. There is always a new tooth popping, a leap, an introduction to something new, and these changes usually happen just as you are getting comfortable with your new normal.

When it comes to sleep transitions, try not to place so much worry around it. There will be MANY transitions you will need to make to your baby’s sleep in the first few years of their life, and just know even if it doesn’t go perfectly, there is always a path towards good sleep.

The transition to one nap marks one of my favorite sleep transitions, right after sleeping through the night. Why? Because being on one nap means greater FREEDOM. You suddenly have more space to play or go out and about both in the morning and afternoon AND ALSO, you get a nice chunk of time during the day where you get a break.

When we only had one child, that one nap was prime time for naps, showers, working out, eating. You name it. We had 3 solid hours of adult only time.

So WHEN should you transition? 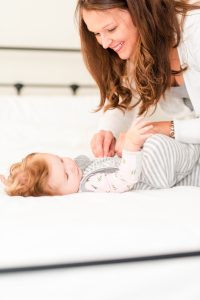 You have several clues here:

One of the naps is starting to take a hit.

Is your little one fighting you or taking a really long time to go down for one of their naps? Has that nap suddenly become a 45 minute or shorter nap? Usually, the nap that gets affected is the afternoon nap. If both naps are going swimmingly and you like the 2-nap schedule, then keep riding it out until it isn’t working anymore.

Early morning wake ups start to creep back in

This is the case with my son and the reason I am in the middle of the one nap transition. I will have to add a note in the coming weeks to tell you whether it resolved his early morning wakes or not. There are two things playing out here. If you are doing two naps, that second nap may not be allowing time to create enough sleep pressure that lasts though those early morning hours when we are more susceptible to waking.

You want to! Your little one is 12 months or older, and a one nap schedule fits your family better.

Even if your baby is perfectly happy on two naps, your family schedule may do better off with just one. In this case, I suggest waiting until at least 12 months to make the change and I would do it gradually so that you don’t start a cycle of overtiredness (is that even a word?) 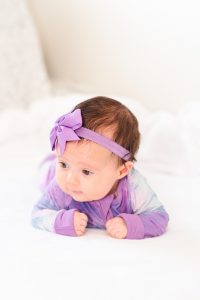 So how do you do it?

Some sleep consultants may suggest that you just go cold turkey on the one nap and allow a few weeks for adjustment, but I am just not a fan of that. Why? Because then you may create problems where there were none. You could cause baby to go down for the nap overtired which may lead to a short crap nap. Worse, would be for baby to already be overtired for bedtime which could cause a wake up just a few hours after being put down or difficulty falling asleep.

So here is my favorite gradual way to do it: 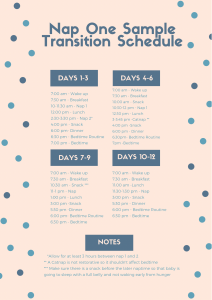 Now one key thing is to keep baby WIDE AWAKE before their new nap or bedtime. Some ideas to successfully do this are:

Some things to note:

That’s all. If you still have questions, don’t hesitate to send me a message or book an evaluation call. Sleep really is only a call away!