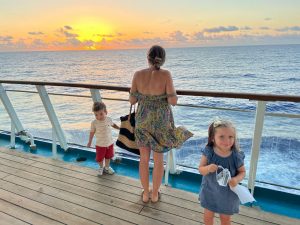 We recently returned from our first cruise trip, and going into it I had no idea what to expect, and honestly, very low expectations. I imagined all sorts of crazy scenarios like sick kids on the cruise, to the kids waking us up at the butt crack of dawn. My husband plans all of the vacations and honestly I was so busy working that I paid very little attention to what he was planning, or what the itinerary would be. The most I did to prepare was to block off my calendar and let families know I would be out of town.

Now that we are back, I can say that it was one of our favorite family trips yet! We also learned a lot on how to better prepare next time around, but even with little preparation, we had a great time!

So why was it so great?

I don’t think I have ever in my adult life fully disconnected from a cell phone/ the internet for more than a few hours. When we planned this trip, we very consciously decided we would not be buying any of the internet packages, and that we would fully unplug. After all, it seemed wrong to pay a good amount of money daily, just to have internet on vacation.

It was fantastic. If only for that, I would go on this cruise over and over again.

Things that were not so child friendly/ could improve:

How was sleep on the cruise? 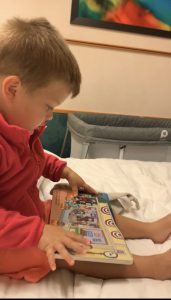 It went so well! We all shared one of those tiny cruise cabins, Alessa slept on a loveseat that was slightly bigger than her, and we brought the pack and play for Nico. We weren’t often in the room so I didn’t feel squished, and both kids slept through the night every night.

We went off schedule with Nico ALOT starting from day 1 when we didn’t get our room until 2pm. He napped until 4pm that day on the bed because they hadn’t brought up his pack and play yet. Some days he napped on the beach (I had to rub his back), other days he would be asking to nap at 10am. We basically just rolled with it, and tried to give him extra sleep after a day that he had a later night or shorter nap. Now that we are back home I will be focusing on earlier bedtimes for both so that we can transition into a more appropriate school schedule. 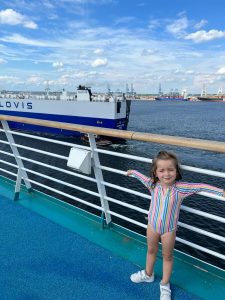 I have to say this is one of the more relaxing vacations we have ever taken with the kids. I usually come back feeling tired from trips, but not this time. The memories we made were fantastic, and the kids can’t stop talking about the boat they went on!

If you have any questions about cruising with littles, please feel free to reach out.